As you know, the AppStore didn’t possess any kind of  payment system before 3.0 firmware. Developers who wanted to offer players a «free-» model learned a little trick: various sorts of points, distributed as standalone paid applications in the AppStore. In exchange for these points, players got extra features to boost their game performance. In Underworld, we have UW points, distributed in the same way. In exchange for UW points, you can get full protection from cops; get detailed info on local market prices and other useful goodies.

It has worked pretty well for us and as far as we can tell, for other developers too. Although there are issues with this scheme, we didn’t like. The most inconvenient one is that players can only buy each Point Pack once: after you buy an app in the AppStore, all the subsequent downloads of the app are free of charge. It is not intuitive from customer’s point of view and we got a lot of feedback on this. Well, we decided to switch to  purchase as soon as it’s released.

purchase these days: can’t sell credits of any kind

An obvious decision was to base the micro transaction system on the same UW points: to sell the point packs right in the game and give extras in exchange for the points.

There was only one tiny problem with that: Apple restricts that kind of usage of  purchase. A quote from the guideline, you cannot sell credits exchangeable for virtual goods». What a surprise for MMO games in the AppStore!

Feature packs instead of Point packs

Well, good thing is that you can at least sell «an item for use». We decided to get rid of the points in the scheme. Instead of gaining points and exchanging them for extra game items, players acquire items themselves, ready for use when they need it. For example:

All items are of «Consumable» sort, so players can purchase them more than once. Everything what the player purchases appears in his Inventory list thus can be used any time.

purchase in free apps? No way.

That’s what Apple says. Not sure, what is the reason for this, but only paid apps are allowed to implement purchase. Too bad for some titles, still willing to offer a « scheme. But for online games, there is a good workaround for this!

In Underworld, we are detecting when the player has first launched a certain version of the game. As soon as the player downloads and starts the Premium version, he gets a handful of extra stuff. Sweet deal!

Was it worth it?

As it comes to financial side, we don’t know yet. But one thing is for sure, the whole system seems to be much more convenient and intuitive for players. Let’s see how it will work out.

If you want to review Underworld: SweetDeal Premium, we’d be happy to supply you with a ! Let me know: or in twitter. 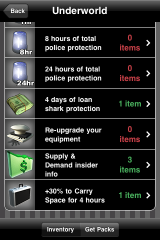 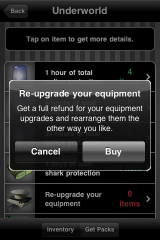 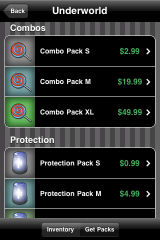 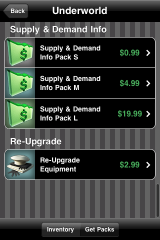