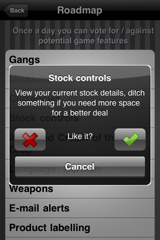 Just now, some of the most interesting features you have suggested were added to an open roadmap. Keep on voting, we wanna know what’s hot!

Couple of words about this roadmap we are running. There are some opinions that we don’t care enough about the features you push to the top of the roadmap. Which is just not true, of course

First of all, there are features requiring quite a while to be implemented and our resources are very limited for the time being. Secondly, there is some stuff which is not present in the list and yet soooo important to the gameplay and fun.

Considering that, believe us that we care about the roadmap a lot. It helps us filter great and wanted stuff from the boring and unuseful one.

Notice that Messaging & Chat features were put out of the list as we already decided to implement them in the upcoming version of the UW. It’s gonna be legen… wait for it… dary!

What’s next in Underworld?

We’ve been pretty quiet lately. Which is because our hands are full with Underworld improvements. Thus it’s time to finally reveal what are we working on.

Well, our first priority is to make the world economy run faster, smoother and more transparent for players. Glad to say we already have a new version in an internal testing featuring all of this. Hoping to push it live next week.

Now to the sexiest and the long-awaited stuff. Thanks to all the feedback we’ve got from you, our development lab is now preparing the three most wanted features, as follows:

Won’t promise any strict release date for this yet, but we want this stuff as much as you do, so…

Please don’t stop with suggestions and other feedback, we’re loving it so much! More, even more, make us beg you to stop :) An open roadmap (the one you can vote for) is going to be updated in the next couple of days.