Re-Equipment pack is now available in the AppStore!

pack works the same way as if you buy it in exchange for 75 UW points in Underworld, but it will only cost you $1.99 (U.S. iTunes Store).

For those who are unfamiliar with the whole concept: the idea is that you get a full refund for your currently purchased upgrades. This allows you to  equipment for better game performance.

Another popular use is that sometimes you are getting second thoughts about upgrading too soon. Refunding equipment makes it possible to rethink what you have done

The same as with point packs, you can purchase pack only once. Be wise.

Get it from the AppStore now! 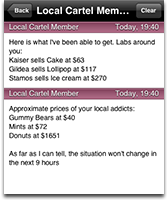 In exchange for Underworld points, you can now get detailed info about supply & demand in your area.

For 10 UW points, a local cartel member will tell you what labs & addicts exist on your current tile and what are their prices. He also knows when the situation will change.

Visit Underworld to check it out.

Economy of Underworld went through some changes

I’m sure you have noticed something new going on in Underworld lately. Many of you didn’t like the changes big time ;)

What has really happened is that the game now gives the advantage to dealers who interact with one another or move from place to place often. Here is how it works.

Back then, you were able to find a lab, pack yourself full with cheap stuff and then just wait until the demand refreshes in the area and addicts will buy your overpriced sweets. This ‘sit and wait’ strategy doesn’t work anymore.

A selection of commodities available in supply & demand on each tile is changing less often now. Moreover, you won’t find the whole variety of sweets on one tile. Some of them you will have to bring from other areas.

When there’s a lab on the map next to you, your best choices are:

Same thing with demand. With an addict located on your tile, you can either purchase merchandize from the dealers in other places or take a walk to another tile.

Basically, this means dealers must interact with each other and share profit. Moreover, the tile refresh time is enough for the traffickers to negotiate over the price and setup stable supply chains.

Underworld economy statistics reports a huge increase of dealer’s profits for the last three days. Bad times are in the past indeed 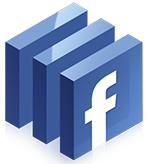 Underworld: SweetDeal 1.1 is available in the AppStore.

As we have mentioned before, the biggest and the most useful feature we have prepared in the update is ability to connect with Facebook. What exactly will you be able to do with that?

First of all, it is your chance to get some extra UW points for free! Underworld rewards you with 10 points when you connect your game profile with Facebook. Also, you are going to get 5 points every time one of your Facebook friends joins the game by your invitation.

Second, connecting with Facebook makes it easy to share your Underworld’s events and achievements with your friends:

As usual, we appreciate your feedback a lot! What other features utilizing Facebook Connect you can think of? What types of UW activity you would like to share with your friends? What about other social networks, like Twitter? Best suggestions will appear in the Open Roadmap.

Update: all game versions, including the free one, are available in the AppStore now.

Phew! Underworld: SweetDeal 1.1 has just been submitted to the AppStore. Hoping guys from Cupertino are going to approve it till the end of this week.

Ok, the main question, as always, is what exactly did we prepare for you in 1.1?

The first and the most important feature of this release is Facebook Connect support. As any other MMO, Underworld is not only about making progress, but also about socializing. Bring your Facebook account into the game to communicate with friends, observe each other’s game achievements and struggle to the top of Friends Cream of the Crop. More details on that will follow in a separate post soon.

Another highly demanded feature added is stock controls. Review your current stock and dump something if you need space quickly for another commodity.

Cream of the Crop now will let you open dealer’s profiles, view their details and communicate. Finally, we did that

The last, but not least — we have put a lot of effort to fix all the known bugs and improve the overall game stability. Yes, «black screen» bug is in the past too

As usual, we’ve put out already implemented features from the roadmap and about to add some new stuff we are getting from the suggestion box. The work has begun on the next version! 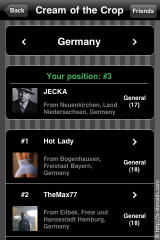 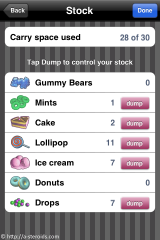