Quick one on Underworld 2

Hey everybody, long time no hear! As already mentioned in comments to the announcement post, we’re not hiding — we’re working our asses off on UW2. So, what’s been done since the last update?

The most important part is that we’ve finished all the necessary research & planning and dived into the code! That’s right. We have decided to throw out the first game’s code base and start from scratch. It was a tough decision because usually it’s not such a good idea, leading to enormous development timelines and huge risks. In the case with UW2, after looking at the vast amount of features and improvements we want to see in the sequel, it was clear to us that the new game needed a new foundation. The awesome part is that the new code works on both target platforms, allowing for almost simultaneous release on both iOS and Android. Cool, huh?

Now with the code development on track, we’re finalizing the Game Design Document and deciding what exactly goes into the initial release and what will have to wait until the update. As soon as we figure it out, we’ll share the scope of work with everybody. That’s the topic of the next update — stay tuned, folks!

Vampire Rush 1.1 is out there

Check out what’s in the update.

Get Vampire Rush from Samsung Apps.

For the last few weeks of game’s presence in the Samsung Apps, we are proud to say the game has been received really great! PocketGamer gave it Gold Award, customer average rating is 4.5 of 5 stars and the game has climbed to the Top 15 paid apps in few countries!

We didn’t want to stop on that though. We’ve collected carefully all the feedback we could get our hands on and used it to craft an update that will make the game even more addictive and awesome! Long story short, here is what you’ll find in the Vampire Rush 1.1;

The update is going to be submitted to the Samsung QA team first thing tomorrow morning. Fingers crossed, it should go live next week!

As usual, the update is free for those who already bought the current version of the game. For those who didn’t do it yet: hurry up, today is the last day of the Halloween 50% discount! Stay tuned, folks!

Underworld: SweetDeal, our location based iPhone game has been updated. Read more about the new features on the game site >> 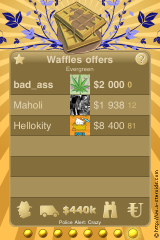 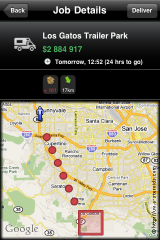 Finally, the update has made it to the AppStore.

Quick, download it and let us know what you think!

Underworld 1.2 is out there

Another update of Underworld, 1.2 is ready and waiting for you in the AppStore.

We have submitted this version long before the 3.0 came out, so the 1.2 doesn’t have any of those bells & whistles of 3.0 iPhone firmware yet. Still it’s worth checking out.

Messages from dealers and other characters (Joey, Max, etc) now appear right over the offers screen, so you can read and answer to them without going deep into the Profile screen. The same has happened with sales notifications — check out the screenshots.

We have also improved the tutorial at the start of the game — hoping it’s going to be a lot easier for the newcomers to catch up with the rules now.

Many small bugs and glitches have been fixed in the game, thanks for the bug reports we get from the community.

Ok, now just go get the new version and let us know what you think. While you are enjoying it, we are almost ready with some stuff. Stay tuned for updates 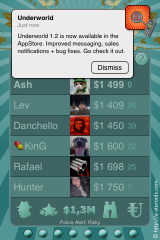 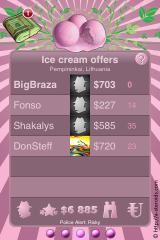 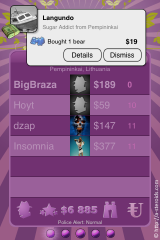